At its core, the wealth management industry is about client relationships. Social and cultural movements correcting the gender power imbalance, combined with changing Canadian demographics, have led to the emergence of two new and powerful investor segments—women and millennials—both seeking a different style of relationship with their wealth management firm.

Rise of women and millennials

Approximately CAD$1 trillion in personal wealth will be transferred from one generation to the next in Canada between 2016 and 2026 (Source: Investor Economics Household Balance Sheet Report – Canada 2017) resulting in a significant shift in investor demographics, in favour of women and millennials.

In Canada, it is estimated that by 2026, women investors will directly control approximately half of total personal wealth (Source: Investor Economics Household Balance Sheet Report – Canada 2017), as the number of women who are single, divorced or widowed continues to grow and Baby Boomer women continue to outlive their spouses. Changing social attitudes towards marriage and careers have further empowered women financially, with many Canadian women marrying later, earning higher incomes and maintaining financial independence within marriage and domestic partnerships. Women bring different investment and financial planning objectives and advisory demands compared to their male counterparts, which traditionally have not been adequately met, resulting in around 70% of women leaving their advisor within one year of the death of a spouse (Source: The Journal of Financial Service Professionals).

Millennials, born between 1982 and 1995, have overtaken Baby Boomers as the largest living generation in Canada, (Source: Nielsen Millennials By The Numbers) bringing with them an increased comfort with digital offerings and increased demand for transparency and control over the wealth process. Millennials continue to challenge historical service models – demonstrating zero tolerance for friction in a relationship, instead demanding rich, on-demand, personalized experiences. The new service models favoured by millennials are proving equally popular with Generation X and Baby Boomer generations. Different attitudes to careers and wealth have led to a focus on shorter investment time horizons, and greater value on flexibility, cash flow and the client experience.

Beyond demographics, investor expectations across all segments are changing, and increasing. They have specific views on money and investing, how they want to consume advice and services, and how they prefer to interact with firms – views that differ in many ways from those traditionally held by investors.

Canadian investors are generally more educated and confident than ever before and have rich digital lives. They don’t expect their digital experience to stop when it comes to financial services. As a result, digital capability and tools represent basic expectations of clients and are no longer differentiators for firms. Firms who lag in the digital space may increasingly be viewed as dated and stale.

Canadians are looking for holistic, goals-based advice to support their overall financial objectives and life goals. Investors do not view their money from the perspective of individual accounts or products, and it could be argued that they never have. As one interviewee commented, “We have taken a most human and important issue to the well-being of a client (health and wealth) and we’ve (the industry) dehumanized it to the point where consumers do not even connect with it anymore”.

Many of these clients are looking for an approach that not only supports their individual financial objectives and life goals, but one that considers the financial objectives of the entire family, or “household”. In contrast, product-led offerings appear to resonate with fewer and fewer investors.

*The idea of applying game design and game mechanics (i.e. interesting narratives, complex scenarios, use of competition and leaderboards) to engage, educate and inspire new behaviors.

The wealth management industry is at a turning point

The industry is experiencing a period of important transition as significant intergenerational wealth transfers result in new investors with differing views on money and the value of advice. Source: IIROC & Accenture Industry Consultation Review, 2018

In a recent Accenture study, investors reported that they benefit the most from advice services regarding retirement and ad hoc advisory support. With other services such as goal planning, estate and advice on specialized products also playing a significant role. (Source: Wealth in the Digital Age – Accenture 2017).

Many investors are demanding more transparency and control in the wealth management process, and the ability to move seamlessly between different types and levels of services, without having to transfer back and forth across business lines and open new accounts. For example, under the Canadian regulatory regime, investors still need to create and manage separate accounts across different lines of business at the same financial institution in order to access both dedicated full-service and order-execution-only services.

In a recent study, Accenture looked at over 30 tools and services that banks/brokerages offered and measured* their importance to clients. 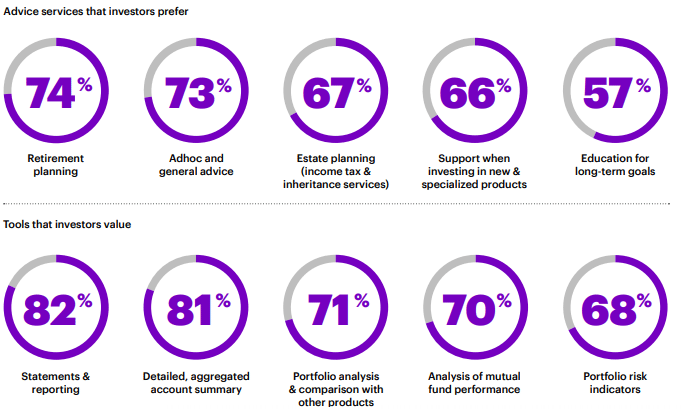 MFDA and IIROC have consolidated

As of January 1, 2023 the MFDA and IIROC have come together as New Self-Regulatory Organization of Canada (New SRO).

New SRO has assumed the regulatory responsibilities of the MFDA and IIROC.

We have set up an interim website for updates and information related to the New SRO including:

Enforcement proceedings, membership lists, continuing education, investor education resources and any other information not set out above continue to reside on www.mfda.ca and www.iiroc.ca.